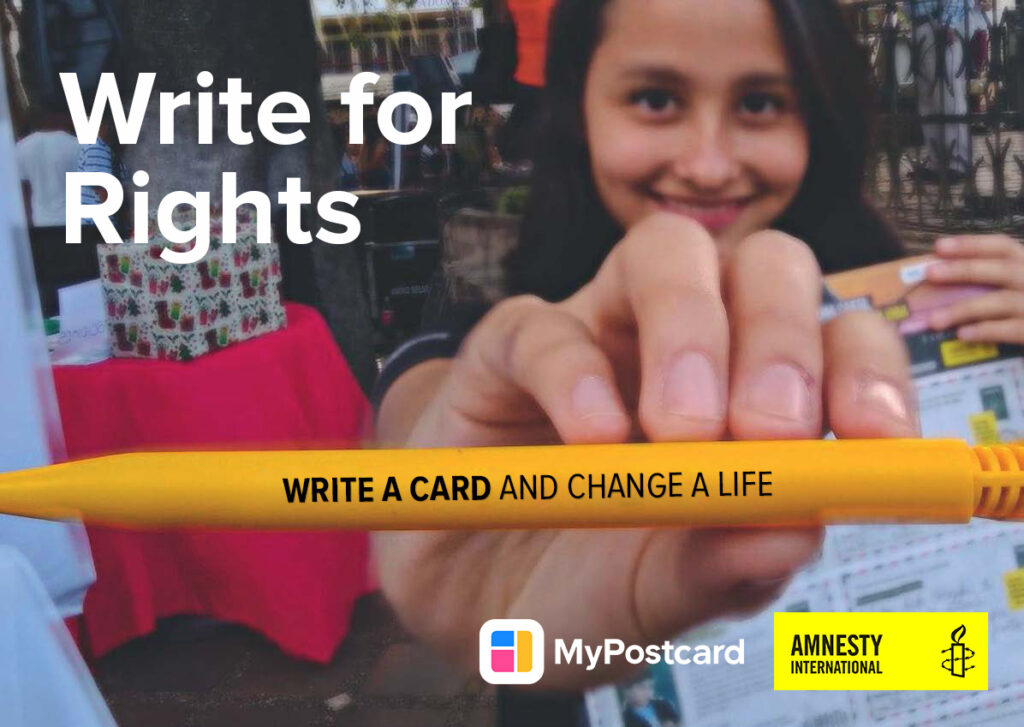 Berlin, November 26th, 2020 – There are times when a postcard can change a life: That is the idea behind the major Write for Rights campaign by Amnesty International. Together with MyPostcard, the organization is calling for postcards to be sent to people whose human rights have been violated and who are exposed to arbitrariness.

Write for Rights – Postcards of hope

Write for Rights is now Amnesty International’s largest global campaign. On Human Rights Day on December 10th, supporters around the world write letters, postcards and emails on behalf of people who have been attacked, threatened or wrongly imprisoned.

Mail from around the world can effectively protect prisoners – it shows government and prison authorities that the world is watching. That’s why MyPostcard is supporting the important work of Amnesty International with a joint postcard campaign.

“Every letter and postcard counts – because they can prevent torture, improve prison conditions or even save lives. Last year six million letters, emails and postcards were sent. That has tremendous power. One or two letters can be ignored by the people responsible – hundreds of thousands can not”, says Ines Wildhage, Cross Media Officer at Amnesty.

“I am really pleased that we can support the important and vital work of Amnesty International through MyPostcard. We are counting on the participation of our users and are confident that being able to send real postcards online to those responsible worldwide with just a few clicks will increase the impact of Write for Rights ”, says Felix Wunderlich, Head of Business Development at MyPostcard. He adds: “It is important to us to give political prisoners worldwide a voice and we are glad that we can make a contribution with our postcards”.

Simply download the free app or go to www.mypostcard.com. Head to the Amnesty International and the Write for Rights campaign design profile. Ten design motifs are available for dispatch and with them ten stories and lives that need supporting. The address and the text are preset. The recipients are authorities who are being explicitly made aware of the injustices and held responsible. The first 500 postcards are free, and every card that follows can be sent for just €0.99 to make a crucial difference.

Millions of people write letters and postcards, sign petitions and organize events every year. And they are successful! People are set free and justice is restored. Every action counts.

Amnesty International is the world’s largest human rights movement. Amnesty is independent of governments, parties, ideologies, economic interests and religions. To ensure its independence, Amnesty International’s human rights work is financed solely through donations and membership fees. Amnesty’s campaigns and activities are based on the principles of the Universal Declaration of Human Rights