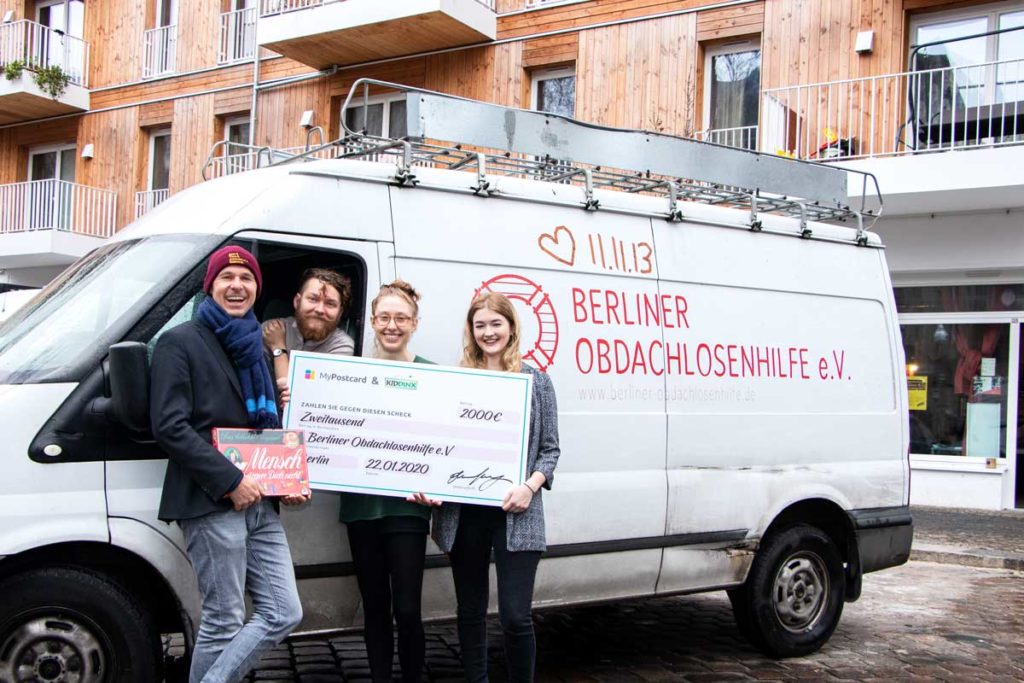 Advent For Everyone: MyPostcard and KIDDINX present donation proceeds to the Berliner Obdachlosenhilfe e.V.

Berlin, 24.01.2020 — The Berlin companies, MyPostcard and KIDDINX started the Christmas campaign, ‘Advent For Everyone’ in December 2019. In December, lots of cards had already reached the Berliner Obdachlosenhilfe e.V. (Help for the Homeless of Berlin), full of kind words. The proceeds from the donations and a cheque have now been presented. With the total sum reaching 2000 euros, the charity campaign has ended successfully.

The Berlin company started an 18-day long Christmas campaign, ‘Advent For Everyone’, which offered a chance to send people in need a few warm words. With the MyPostcard app, people were able to personalize a card online from one of 17 designs created especially for the occasion. These cards were then sent ‘as normal’ by post automatically to the Berliner Obdachlosenhilfe e.V. During the campaign, that’s how dozens of postcards were sent, contributing to a donation sum of one thousand euros. This was then matched by campaign partner, KIDDINX, making the grand total to be presented €2000.

As well as these emotive postcards, the sum of money has now also been presented. The two campaign partners are confident that every euro will be spent exactly where it is needed most.

KIDDINX Media GmbH offers entertainment for children in Germany – and has for over 40 years. In their online shop they sell and distribute, among other things, audio plays, music, cartoons and apps for kids and, as German licence holder for the World Disney Company, German audio plays for German-speaking countries as well. Be it Benjamin Blümchen, Bibi Blocksberg, Bibi & Tina, ‘die Sorgenfresser’, Leo Lausemaus, Wendy, or the Little Polar Bear – the KIDDINX brand can be found in every kid’s bedroom.

The postcard of tomorrow: MyPostcard is the app making it possible to send your own photos as real printed postcards. The app is currently available in 10 languages and, with more than 20,000 designs, offers the widest selection of postcard designs worldwide. MyPostcard takes care of printing and mailing your personalized postcards worldwide. Its founder and CEO is designer turned serial entrepreneur, Oliver Kray. The company is based in Berlin with an office in New York and currently employees 30 employees.