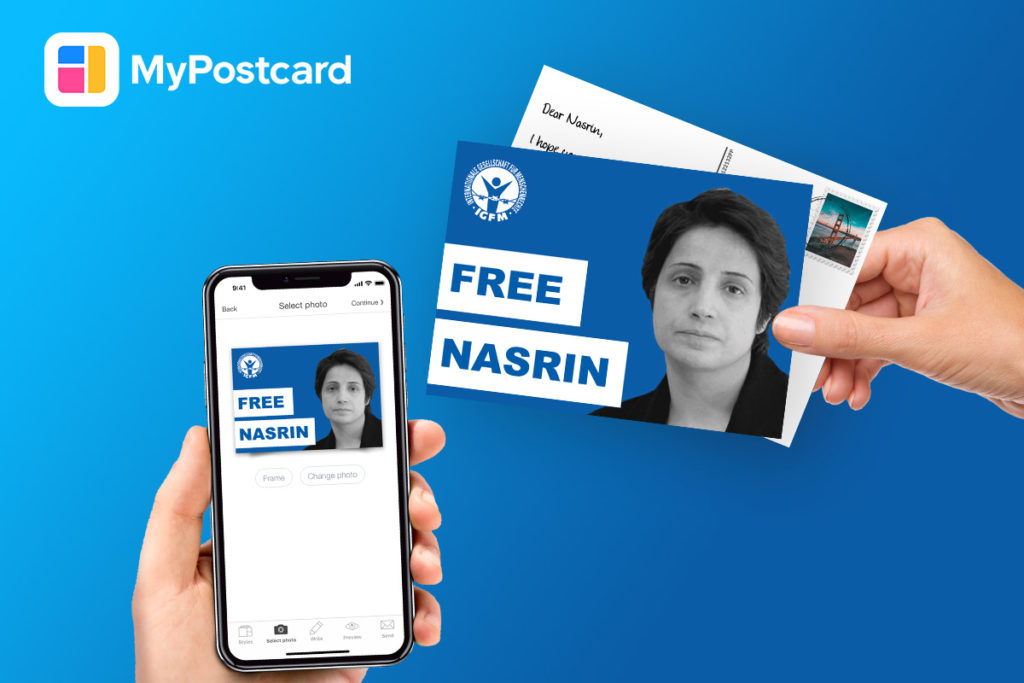 Berlin, 6th April 2020 – A postcard doesn’t just connect people, it delivers a message and acts as a mouthpiece. Lots of postcards combined can send a signal. The International Society for Human Rights (ISHR) begins an initiative together with MyPostcard on April 1st 2020 for Nasrin Sotoudeh. The internationally known Iranian human rights defender, Nasrin Sotoudeh advocates women’s rights and stood against the compulsory hijab in her home land. For this, she received an arbitrary 33-year prison sentence, as well as 148 lashes in 2018. She is currently being held in Evin Prison. “With this postcard initiative we want to raise awareness about the fate of Nasrin Sotoudeh, to show her and the Iranian regime that the world has not forgotten her”, explains Martin Lessenthin, spokesman for the ISHR.

The fate of the Iranian human rights lawyer

Neither threats, imprisonment nor abuse were able to intimidate Nasrin Sotoudeh. She uncompromisingly demanded compliance of Iranian rights and the international minimum standards. On June 13th 2018,  the human rights lawyer was once again arrested without warning and sentenced to five years in prison. As a result, her chance of being present during the trial and to defend herself was denied. In a later trial, the human rights defender was sentenced to 33 years imprisonment and 148 lashes for her actions against the compulsory (in Iran) hijab. Nasrin Sotoudeh received the Sacharow Prize for freedom of thought in 2012 from the European parliament. In 2018, she was awarded the Tucholsky Prize and is also a member of the  advisory board of the ISHR. She is serving her sentence in the infamous Evin prison. As a result of the escalation of the Coronavirus pandemic in Iran, she, along with thousands of other prisoners, has been moved for two weeks in ankle shackles to house arrest.

Together with MyPostcard, the ISHR is calling for people to send uplifting messages to Nadrin Sotoudeh in prison. “Post for political prisoners is often an effective protection against mistreatment and gives the imprisoned person hope. That’s why we’re supporting the vital work of the ISHR. We want to raise awareness of the fate of Nasrin Sotoudeh through these postcards”, says Oliver Kray, founder and CEO of MyPostcard. The campaign postcard with Nasrin’s photo and the words “Free Nasrin” can be found under www.mypostcard.com/designs/igfm or in the app by entering the keyword “ISHR” in the search bar. A message suggestion – which can be changed – as well as the address of the prison will be automatically pre-filled from April 1st 2020. MyPostcard provides 1,000 free codes for new and existing customers of the app for this campaign. The freecode “FREENASRIN” will then be redeemed automatically at the checkout. The ISHR advises you to write a personal message in English so that the human rights activist can understand it.

The International Society for Human Rights (ISHR) is a non-profit, non-governmental organization. Since it was founded in 1972 in Frankfurt am Main, the ISHR has supported people who peacefully advocate for the realization of human rights in their countries or who have been persecuted for claiming their rights. The foundation of their work is the United Nations Declaration of Human Rights.

The postcard of tomorrow: MyPostcard is Germany’s most successful postcard app making it possible to send personal photos as real printed postcards. The app is currently available in ten languages and offers more than 50,000 designs making it the biggest selection of postcards available worldwide. With the help of an international printing network, MyPostcard takes care of printing, stamps and worldwide delivery of the personalized postcards. Founder and CEO of the company is designer and serial entrepreneur, Oliver Kray. The company is based in Berlin with an additional office in New York and currently employs 30 employees. It ranks among the Financial Times’ 1000 Fastest Growing Companies in Europe, and in the ecommerce category, even scores 19th place.