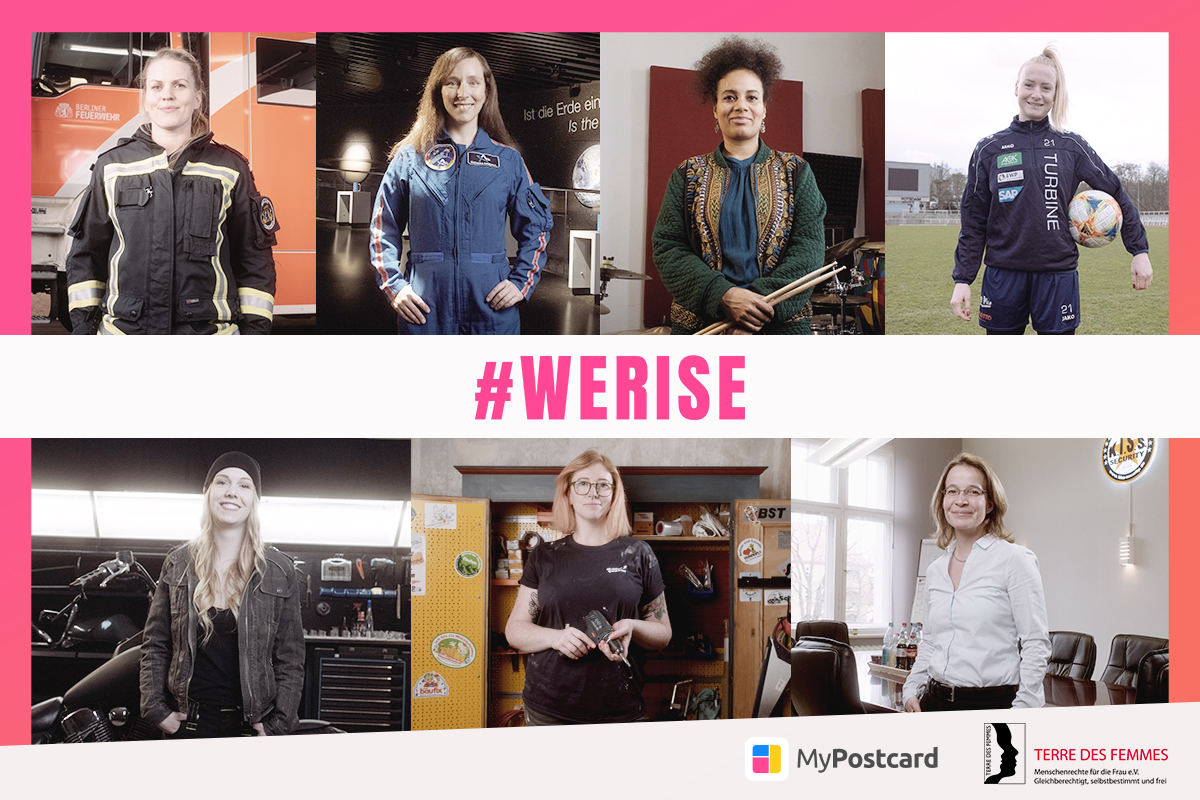 Berlin, 08.03.2020 – International Women’s Day has been an official bank holiday in Berlin since 2019. To celebrate its first anniversary, TERRE DES FEMMES and MyPostcard are once again collaborating. With the #WERISE campaign, they are calling for mutual empowerment among women and for more female role models in every profession.

The percentage of women in the workforce has doubled in the last 50 years. In comparison, women have higher incomes, are better educated and are more often employed. Gender equality is increasingly in focus. At first sight,  the developments of the last few decades speak to a positive dynamic. But what at first sounds great is more sobering upon closer inspection. Women are still disproportionately underrepresented – or even rarities – in manual and trade professions, as well as in technology and scientific fields. Women don’t just earn less than men, they are also more frequently employed in part time work.

“Having a large proportion of women active in society, politics and the economy in the 21st century should be a matter of course. Unfortunately, there’s traditional gender roles and structures preventing this equal coexistence. Change within a society is feasible where there are role models showing what’s possible. I’d like to thank MyPostcard for this wonderful initiative,” says Christa Stolle, Executive Director of TERRE DES FEMMES.

The fact that there are still typical “female professions” and “male professions” is one of the reasons for the pay gap, which has stood at 21% for years.  Despite this, the proportion of highly-qualified women in Germany is currently at a record high. Not to mention that a shortage of skilled workers could ensure that change takes place, especially in male-dominated fields.

Clearly, more role models are needed. Women who are trailblazers; successful in their careers. Above all, in careers where they, as women,  make up a considerably small portion of the workforce. Because then they can help drive other women and motivate them to believe in their own dreams and to fight for their own goals. Girls and women of every age need the assurance that they can realize their goals in any profession. At the moment, less girls apply to jobs in the technology industry than boys – quite simply because they’re lacking any role models in this line of occupation. In order to break the circle, women must practice self-realization in order to achieve a gender balance in the long term, particularly within science or tech professions.

This year’s #WERISE campaign by TERRE DES FEMMES and MyPostcard portrays seven strong women. Women who have had to show a lot of courage and persistence along the way to realizing their dreams. In short interviews, they talk about the realization of their professional dreams and the obstacles they’ve encountered along the way. It may not have been easy all the time, but it was worth it. Seven extraordinary women, who have all managed to find their own way in a male-dominated profession: motorcycle mechanic; bodyguard; tradesperson; firefighter; professional footballer; drummer; astronaut. They offer the next generation encouragement and the courage to go their own way. The collaboration partners urge you to send postcards to the amazing women in your life and tell them what it is that makes them so special and inspiring. Card designs from the category #WERISE may be sent or any cards that are sent using the code WERISE.

For every card that gets sent in the #WERISE campaign, MyPostcard will donate the proceeds to TERRE DES FEMMES, thereby also supporting the fight for the enforcement of human rights for women worldwide. “Social engagement has been important to us since the start. It’s amazing to see how much can be changed through postcards. We are really excited to be working with TERRE DES FEMMES for the second time, and that, in doing so, we’re able to contribute something towards a self-determined life for girls and women worldwide,” says Oliver Kray, founder and CEO of MyPostcard. With a strong campaign video and specially made TERRE DES FEMMES postcard designs, the month-long campaign begins on March 8th 2020.

TERRE DES FEMMES e.V. is a non-profit human rights organization, which advocates for a self-determined, equal and free life for women and girls worldwide. Through awareness-raising initiatives, publications, events, campaigns and lobbying, TERRE DES FEMMES is sensitizing the public and politics to sex-based violence and discrimination. The work of the organization concentrates on the key topics of female genital mutilation (FGM), domestic and sexual violence, marital rape, trafficking, prostitution, equal rights and integreation, as well as international cooperation. Further information can be found here www.frauenrechte.de/en/.