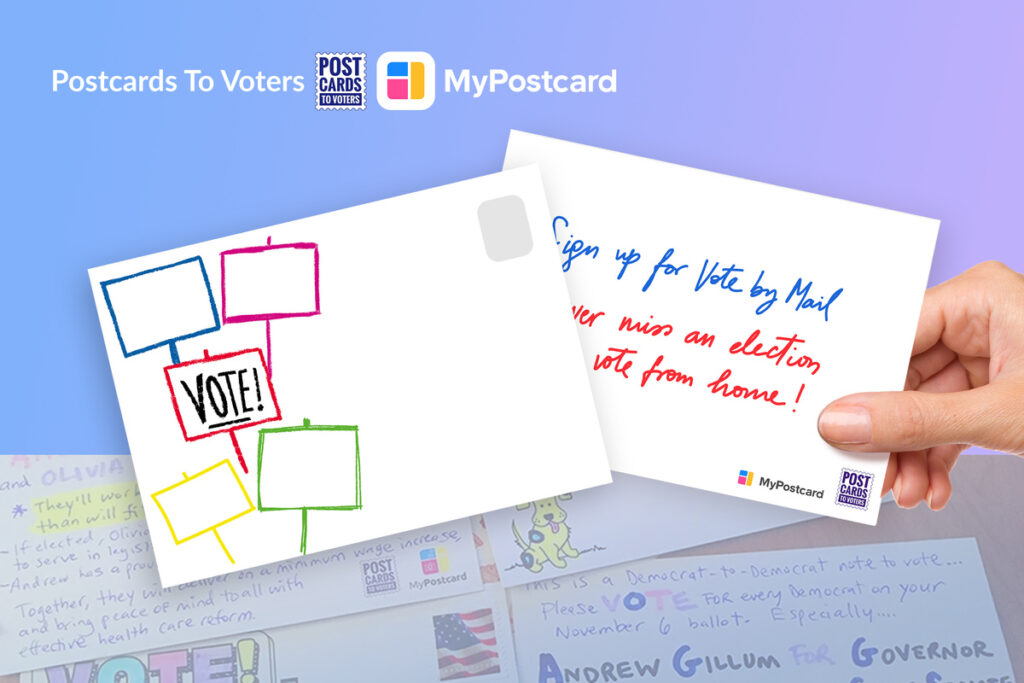 Berlin, 19.04.2021 — As an official partner of the volunteer initiative from the USA, MyPostcard has been supporting democratic election campaigns for three years now with its own postcard designs and the resulting proceeds.

The all-volunteer initiative allows individual writers to send handwritten reminder postcards to elections to increase voter turnout in favor of Democratic candidates. As an official partner of Postcards to Voters, 50% of the proceeds from MyPostcard’s exclusive design postcards have now gone towards the volunteers’ running costs since the collaboration began three years ago.

Postcards as a medium

At a time when millions of dollars are spent on election campaigns in the U.S., the electoral vote is a highly competitive commodity. Unlike lavishly produced campaigns or telephone voter calls, writing postcards is a very different approach. That’s because postcards are no longer just greetings – they can be mouthpieces and ambassadors. “Postcards have a great chance of being held in your hand and noticed, and maybe even pinned to your refrigerator,” says Tony the Democrat.

To date, the Georgia Run-Off campaign (Nov 2020-Jan 2021) has been the largest in numbers for Postcards to Voters. Nearly 2 million postcards were sent out by the authors for this vote. Postcards were thus an important democratic tool and made a critical difference.

It is the most important democratic feature, political participation, which stands up to these crises: In 2020, voter turnout in the U.S. presidential election was around 66.4 percent, according to preliminary data from Statista. In relation to those eligible to vote in the U.S., more citizens participated in the elections than at any time since 1908 – A new record and an indication of the striving for change. And doing so with the tools of a modern democracy.

“Since the beginning of our corporate history, social commitment has played a decisive role for us at MyPostcard. We want to make a long-term and sustainable contribution to shaping a better world. Therefore, it is a great honor for us to support the so important initiative Postcards to Voters for more than three years and thus actively represent democratic values,” says Oliver Kray, CEO and founder of MyPostcard.

About Postcard to Voters

Tony McMullin’s initiative uses handwritten postcards to send Democratic voters a personal reminder for upcoming elections. Spreadacross all 50 states, the organization claims to have more than 100,000 volunteer postcard writers. Anyone can register online at https://postcardstovoters.org and be verified via a handwritten postcard. As an official PTV volunteer, it is then possible to receive a number of Democratic voter addresses via text message, Slack, Facebook bots or email. The cards can then be customized and written.

Postcards for Down Under – MyPostcard teams up with Australia Post