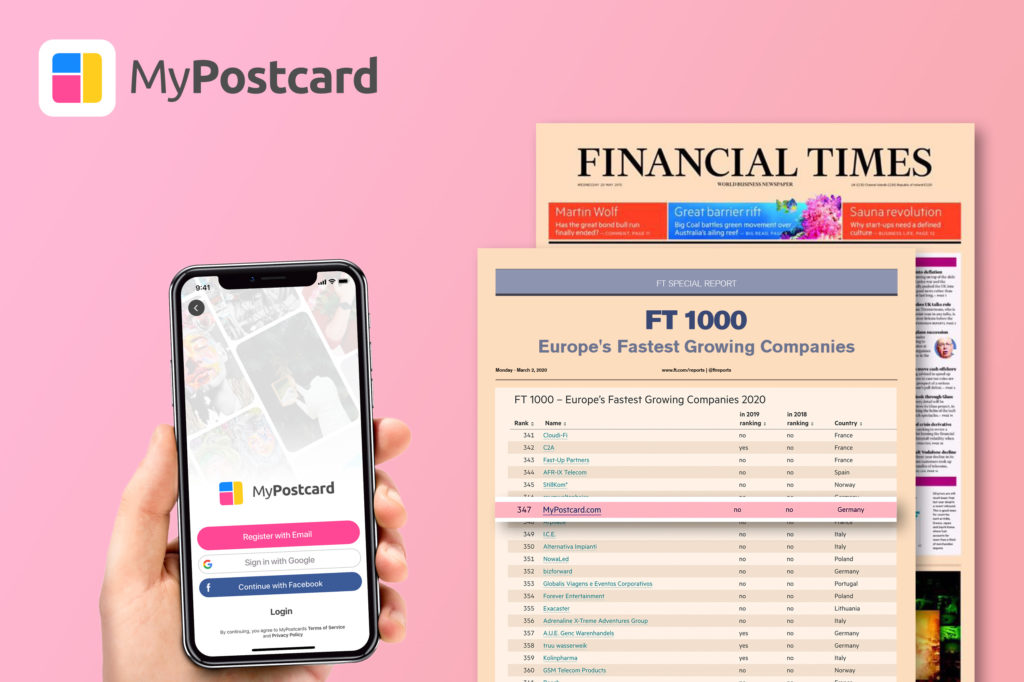 Berlin, 03.02.2020 – MyPostcard ranks in place 347 in this year’s FT 1000, meaning it belongs among the fastest-growing companies in Europe according to the Financial Times and Statista.

The annual ranking of the Financial Times in partnership with Statista enters its fourth year in 2020, and names the one thousand fastest-growing, web-savvy European companies, which are based predominantly on technological innovations. According to the Financial Times, MyPostcard belongs to Europe’s fastest-growing companies, achieving place 347 in the total ranking and place 19 in the Ecommerce category. This proves that the company is a competitor to be reckoned with, not just in Germany, but in the whole of Europe. “Ranking so highly in a prestigious economic magazine like the Financial Times is truly an honour for our company,” comments Oliver Kray, founder and CEO of MyPostcard.

The MyPostcard app makes it possible for users to personalize their greetings with their own photos and send them worldwide as real, printed postcards. MyPostcard takes care of the print and worldwide shipping. With three million downloads, the Berlin-based company has become the most successful and, with a rating of 4.6 stars, most popular postcard app, making it the German market leader in the postcard app field. MyPostcard brings the good old postcard into the digital age.

The FT 1000 – Europe’s fastest-growing companies is a list of the 1000 biggest European companies which achieved the highest turnover growth percentage between 2015 and 2018. The ranking reflects the ever-increasing importance of technology.

About the Financial Times

The Financial Times (FT) is a liberal-economic newspaper based in London, published six days a week. Given their countless political articles, this is no purely financial magazine. The daily newspaper is available in more than 100 countries and has an international readership numbering 1.5 million people.