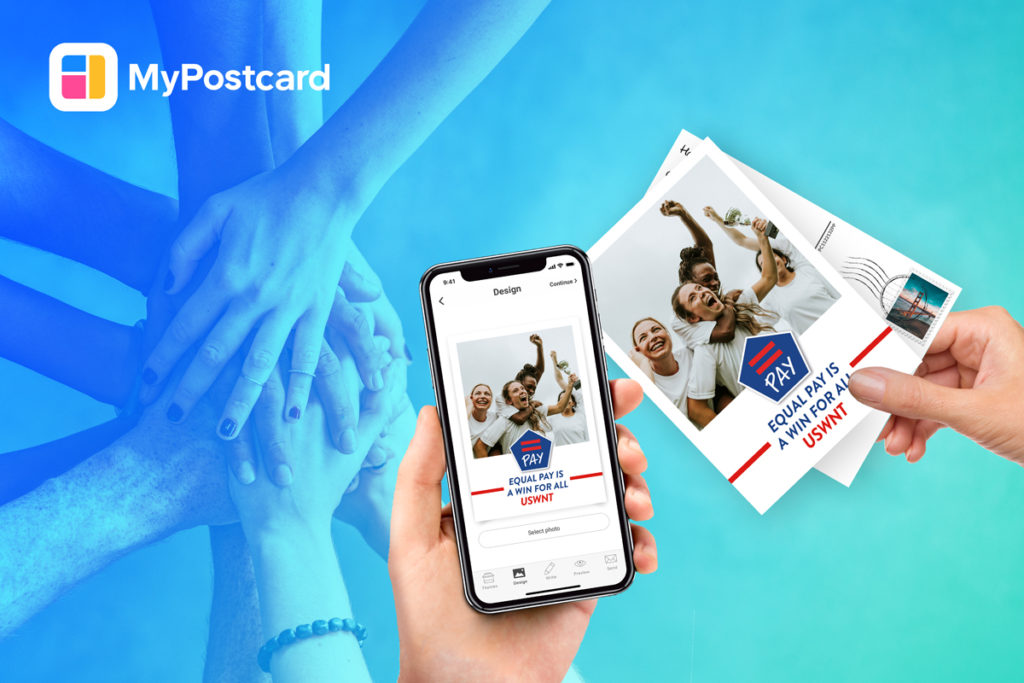 Together, Val and MyPostcard created a collection of unique postcards designed for this cause. New customers to MyPostcard can send one of these cards of support, tailored with their own photo if they’d like, directly to the U.S. Soccer Federation. The cards come with suggested sample text to use, and the mailing address for USSF imprinted on them, simplifying the process. Supporters can visit MyPostcard’s dedicated Equal Pay page to select and send their own postcard using the promo code EQUALPAY to send the card free of charge.

Says Val Haskell, “On July 7, 2019, I had the pleasure of being at the Women’s World Cup final. As the awards ceremony unfolded, the crowd began chanting ‘“Equal Pay”. I was surprised and delighted, and wondered what I could do as a fan to help this amazing team, that delivers over and over again, get paid. Not long after that, I had a vision of flooding the U.S. Soccer Federation with postcards of support for the team. My hope is that with all of us sending postcards showing, in a physical way, how much support there is behind the USWNT for equal pay, that the USSF will pay them equally and that other sports will follow.”

Haskell’s campaign has attracted the support of industry professionals including soccer player Kate Deines, formerly of Seattle Reign FC, and Candice Hicks-Coleman, Director of Human Resources for the Dallas Mavericks.

“Although it’s been amazing to see the progress that’s occurred over the last few years, it is clear we still have a long way to go in regards to achieving equal pay. The highly successful U.S. Women’s National Soccer Team is a perfect example of this. Standing up and actively fighting inequalities is imperative if we want equal pay to be commonplace. One easy way to support this cause is participating in MyPostcard’s #EqualPay campaign and sending a free postcard to USSF in support of the USWNT’s historic fight”, says Deines.

“It’s hard to believe that we are in 2020 and women athletes are still fighting for equal pay. I am thankful to work with an organization like the Dallas Mavericks where I have a role that gets to champion equality, bridge the wage gap and encourage women in leadership. Women play equally as hard, we are equally dedicated and should be fairly paid; until then, we must continue to stand together and create a unified voice that not only believes in change – but passionately pursues it and won’t stop. You have the power to raise your voice from anywhere by sending an Equal Pay postcard”, added Hicks-Coleman.

“We at MyPostcard are huge advocates for gender equality”, says Felix Wunderlich, Head of Business Development for MyPostcard. “Val’s idea for this campaign is one that we saw a clear way to help and hope that everyone will want to send their free postcard in support as well. The momentum we can create here could push real change, which the U.S. Women’s National Soccer Team, and women across the world, deserve”.

MyPostcard and Val Haskell hope that with enough demonstrated support shown through the Equal Pay postcards campaign, the U.S. Soccer Federation will reconsider its payment structure and show the U.S. Women’s National Soccer Team the equality and respect it deserves. This win would serve as a push for equal pay within other fields, sports or otherwise. This fight is about more than one team, it is about all of us.

More information on the movement and its mission can be found at Protestpostcard.com. Free postcards of support can be sent directly to the  U.S. Soccer Federation from Mypostcard’s dedicated Equal Pay page.

MyPostcard (the postcard of tomorrow) sends personal pictures from users’ phones and computers as real, printed postcards everywhere in the world, all hassle free – we worry about shipping, printing, and posting. Our app can be downloaded in ten languages and provides more than 20,000 designs, the most designs offered worldwide. Oliver Kray, a designer, Serial-Entrepreneur, and CEO, founded MyPostcard, which is based in Berlin, has an office in New York, and currently employs 30 people.