About UsPress releasesAnd Here It Is! The Big Postage-Comparison by MyPostcard

And Here It Is! The Big Postage-Comparison by MyPostcard 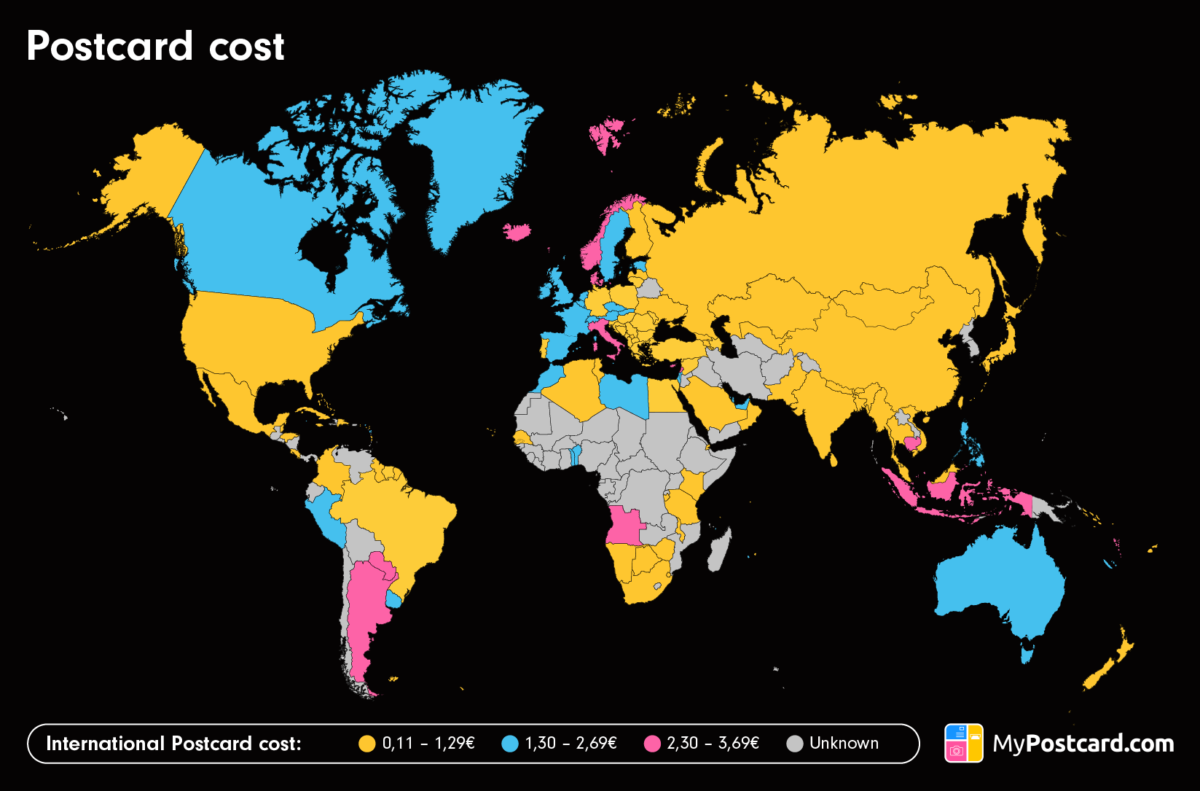 Berlin, May 22nd 2018 – Postage rates from Argentina to Zimbabwe: Postal greetings are sent from a vacation, joining the wedding invitations and the funny birthday cards in the mailbox. The occasions for which postcards are sent vary as widely as the postage rates in different countries. MyPostcard, the postcard app with the world’s largest postcard selection, has analyzed postage costs in 107 countries. And where is it especially favourable for vacationers to send greetings home? “Germany ranks in the lower middle price category among the 40 European countries surveyed – for example, in international mail order, it is ranked 13th,” says Oliver Kray, founder and CEO of MyPostcard.

Affordable From Malaysia, Expensive From the Maldives

If you admired the Petronas Towers in Kuala Lumpur and want to send your loved ones at home a greeting by post, you’ll probably be pleased: Malaysia has the cheapest postage for a postcard to Europe worldwide – it is the equivalent of only 0.11 euros. Somewhat more expensive are the holiday greetings from the Fiji Islands (0.16 euros) and Sri Lanka (0.18 euros). When being sent to Europe, postcards to Germany from Moldova (0.47 euros) and Serbia (0.51 euros) are the cheapest. Travellers who are on the beach of the Maldives and want to send their postcards from there will, however, have to dig a lot deeper in their pockets. The postage for a postcard to Europe is the equivalent of 8.64 euros in the Maldives. In Argentina (3,64 Euro), Denmark (3,63 Euro), Angola (3,42 Euro) and Paraguay (3,12 Euro) too the postage is much more expensive. In an exclusively European comparison, the Scandinavian countries demand the highest postage: For example, vacationers pay € 3.63 for a postcard home in Denmark, € 1.99 in Sweden and € 1.87 in Norway.

If you want to write a holiday card to friends or family living outside of Europe, you pay the least in Malaysia and the most in the Maldives. “In more than half of the countries surveyed, the amount of the postage remains the same – regardless of whether you send the postcard to Europe or another country worldwide,” explains Oliver Kray.

Postage within Europe is Often No Cheaper Than International Postage

For example, football fans who want to send a postcard from Russia to friends at home during the World Cup will pay up to € 0.73 for postage both to Europe or to anywhere else internationally. Holidaymakers who would like to surprise Royals fans in Germany with a Meghan & Harry postcard from Great Britain will have to pay the equivalent of 1,43 euros for a stamp. As a rule, the postage for international shipping increases only slightly, however there are a few exceptions: In Italy, holidaymakers pay € 1.00 for a postcard to Germany. However, if sent to a country outside of Europe, you’d have to pay up to 2.90 Euros for a stamp. In Austria, the postage price, in this case, more than doubled – from 0.80 to 1.70 euros. Visitors to the Vatican City can send a postcard within Europe for 1.00 euro, but up to 3.00 euros in other, non-European countries worldwide.

Even within each continent, postage rates differ significantly: For example, tourists pay 0.83 euros for a postcard from Kenya to Germany and 0.99 euros internationally. If you want to send a greeting from Cape Town, you spend almost half – 0.57 Euro worldwide. If you are planning a tour of Asia, you should think about which country to send your postcard from. While vacationers in Malaysia only have to spend the equivalent of 0.11 euros on a stamp, this amount increases in Thailand (0.37 Euro to Europe and up to 0.55 euros internationally), China (0.59 euros) and especially in Indonesia (from 2.62 euros) becoming significantly higher. Those who take a trip to the Fiji Islands after their holiday in Australia should send off their postcards there: in Melbourne, tourists pay the equivalent of up to 1.88 euros for the international postage, in Suva, however, just 0.16 euros. The same applies to the American continent: At the Carnival in Rio vacationers can send a postcard for around € 0.89, in Paraguay, the cost of postage to Europe equates to a whopping 3.12 euros. If you go to Niagara Falls, you should consider sending your postcard from the US side: In the US, the price for international postage is calculated at 0.97 euros, and in Canada, it leaps to 1.62 euros.

MyPostcard (the postcard of tomorrow) sends personal pictures from users’ phones and computers as real, printed postcards everywhere in the world, all hassle free – we worry about shipping, printing, and posting. Our app can be downloaded in ten languages and provides more than 10,000 designs, the most designs offered worldwide. Oliver Kray, a designer, Serial-Entrepreneur, and CEO, founded MyPostcard, which is based in Berlin, has an office in New York, and currently employs 25 people.

For more information and questions: